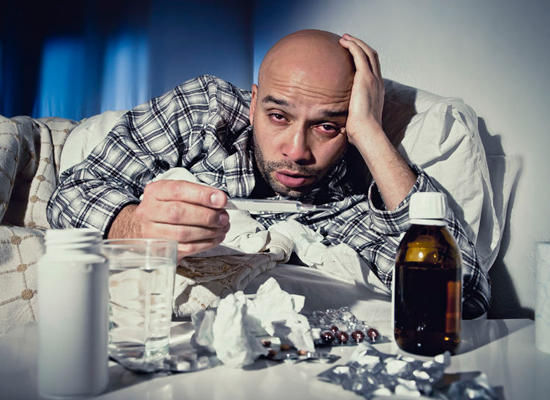 Cold and Flu When to See a Doctor

DEFINITIONS
The cold, which is the same medical entity as the common cold, and the flu, also referred to as influenza, are two extremely common, usually seasonal viral infections, mainly characterized by fever, headache, cough and a runny nose. The two terms, cold and flu, are used by many patients interchangeably, but they are different medical conditions, with different causative viruses and complications, which many times cannot be told apart.

EPIDEMIOLOGY AND CAUSES
It cannot be argued that the common cold and the flu constitute two of the most common types of human ailments, if not the top two. Statistics show that adults are affected 3 times per year on average from the common cold, whereas children suffer from it approximately 6 times every year. Concerning the flu, it has been reported that about 1 in 5 people in the United States are affected by it every year. You can catch the cold all-year round, but it usually happens in the winter. The flu, on the other hand, runs from fall to spring, and, just as the cold, people most frequently get it during the winter.

The cold and the flu have the same general cause: they are the results of viral infections. However, different types of viruses are responsible for the two diseases. The cold is caused by the rhinovirus in the majority of the cases, whereas the flu is a result of infection by the influenza virus A, B or C.

PRESENTATION
Symptoms tend to overlap, and it is not always easy to distinguish between the common cold and the flu.

Cold
Symptoms that are typical of the common cold include a runny nose, sneezing, and coughing. Nasal discharge may be yellow- or green-colored and the cough is productive, which, is a medical term to say that it also produces sputum. Sputum may be clear, yellow or green. These symptoms are often accompanied by a sore throat and mild, if present, pains in muscles and bones. A mild headache may also exist. Adults do not usually have a fever when they are affected by the cold, and, if they do, it is low-grade.

Flu
The flu results in very similar symptoms. A runny nose and sneezing are sometimes present and the cough is generally more dry, without the production of sputum. You may sometimes get a sore throat and body aches that can be debilitating and affect the whole body. Fever is present and high. The flu, especially in very young and very old people who have other health problems, can result in serious complications, such as pneumonia, multiorgan failure and, possibly, hospitalization and death.

DIFFERENCE BETWEEN THE FLU AND A COMMON COLD
Keep in mind that, in adults, high fever with chills indicates the flu. A cough that results in coughed-up sputum is more compatible with the common cold. Furthermore, severe body aches felt across the whole body with extreme weakness suggest that you are down with the flu. Even though it may seem like a simple task to differentiate between the two infections if someone does not get tested, it is many times difficult to tell the difference between some symptoms may not be present, or may suggest the other infection. In a nutshell, the cold is an infection that tends to be milder and develop gradually, whereas the flu develops abruptly, with severer symptoms and may have serious complications for some people.

HOW DO WE GET THE FLU OR COLD?
Both the cold and the flu are caused by viruses that go about in the air. When a person is infected, tiny droplets containing the virus are thrust into the air. You can get these viruses if you happen to be nearby and inhale the droplets; to get infected, someone does not need to sneeze right on you, but a very small amount of airborne viral load that you won’t even feel and can be transmitted when someone talks are enough. Another way to get infected is by touching a surface or object previous touched by someone who had the virus.

WHEN TO SEE A DOCTOR
If you belong to any of the categories of people at high risk of complications and you experience symptoms possibly related to the flu or the cold, do contact your doctor. If you do not belong to any of these categories, and experience cough, fever, fatigue, congestion, and headaches that do not get better in 2 days, also contact your doctor. If you develop other alarming symptoms, such as fainting, dyspnea (difficulty in breathing), severe chest pain and loss of orientation or confusion, seek immediate treatment, as they are indications of a disease spread and subsequent complications.

WORKUP
Depending on your symptoms, your doctor will acquire a detailed medical history and perform a thorough physical examination. He or she will obtain vital signs (blood pressure, temperature, heart rate and oxygen), listen for abnormal breath sounds through auscultation, perform a neurological exam and look at the skin for any abnormalities. They will also check your ears and throat. Tests that provide a reliable answer to whether you have the flu are available and require the doctor to obtain a swab with material from the nose or throat. The test is completely painless and non-invasive.

TREATMENT
Basic treatment for the cold and flu involves fluids, resting and staying at home. You can use painkillers and over-the-counter NSAIDs (nonsteroidal anti-inflammatory drugs) to relieve pain. A doctor may prescribe antibiotics, but only in the case of a complication, or for the avoidance of a potential complication; otherwise, antibiotics do not work for the common cold or flu itself, because they target bacteria, not viruses. Anti-viral drugs to fight the flu are also available, which need to be prescribed and ingested within 48 hours from the start of symptoms.

VACCINATION
Anti-viral flu vaccines are available and are usually administered to people at high risk of ending up with complications if they get the flu, healthcare providers or other groups of people. Talk to your doctor to see if you really need to get a vaccine.

POPULAR MISCONCEPTIONS
• I avoid getting out in the cold, because, I will catch a cold. Being in cold temperature and air doesn’t cause you to catch a cold. It is a virus that results in the disease. • I got the flu this year, this is why I will not get it again. People can get sich with the cold or flu more than one time per year, simply because there are various types and sub-types of viruses that cause them.