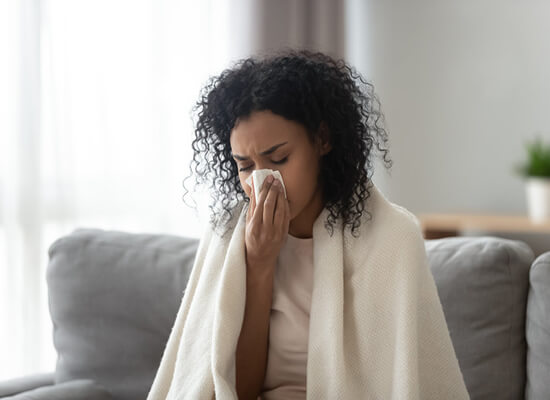 Sinus Infections and When to See a Doctor

Sinuses infection is also known as rhinosinusitis or sinusitis in the medical world. It is the swelling or inflammation of the sinuses tissue lining. In simpler terms, sinuses cause your nose to be blocked and swollen. The swelling hinders the normal drainage of mucus, causing it to accumulate and fill the spaces between the nose.

Inflammation or swelling of the sinus tissues in sinus infection can result from a bacteria, virus, or fungus infection. Additionally, smoking in adults is one of the major things that cause sinuses conditions second to infections. However, to better understand sinuses infection, it is vital to understand what sinuses are and how they operate. The sinuses are four paired hollow air pockets or cavities located within the bones behind the cheekbones, between the eyes, and on the forehead. These air pockets are connected by narrow channels and make mucus to keep the inside of the nose moist. The primary purpose of the mucus is to protect the nose against allergens, dust, and bacteria. When sinuses are in good condition, they are filled with air. However, when they are blocked, they get filled with fluid. As this happens, bacteria get a conducive growing environment which can cause an infection. The bacterial infection caused as a result is referred to as bacterial sinusitis. However, it is vital to note that inflammation may occur due to a sinus infection or structural issues in the nose. Sinus infection is a common health complaint among most people in the world. However, it is more prevalent in people with conditions such as allergic rhinitis, swelling of the lining resulting from allergens and nasal polyps, and small nose lining growth. A shift in the nasal cavity, also known as a deviated septum, can result in sinuses. Also, respiratory tract infections can thicken and inflame the sinus membrane leading to mucus blockage and eventually sinuses. A weak immune system resulting from illness or medications and the common cold can also result in sinuses. Consequently, other medical conditions such as complications from cystic fibrosis and HIV are significant contributors to sinuses conditions. On the other hand, children with allergies and other illnesses are prone to developing sinuses infections. Those in smoky environments who drink while lying on their back are also in danger of developing sinuses. Others at risk of developing sinuses include those with aspirin sensitivity, dental infections, fungal infections, tumors, asthma, and those regularly exposed to pollutants like smoke.

Acute sinusitis type has the shortest span. It only lasts for short periods of 2 to 4 weeks. It is usually a viral infection resulting from the common cold but can also result from bacterial infection.

Subacute sinusitis sinus infection only lasts between 4 and 12 weeks. It usually occurs with bacterial infections or seasonal allergies.

Recurrent Acute Sinusitis is a type of sinusitis infection whose symptoms reoccur four or more times in a year and stays for more than two weeks with each occurrence.

Chronic sinusitis lasts for more than 12 weeks, and its symptoms are usually severe compared to the other types. Chronic sinusitis primarily results from bacterial infection; thus, it mainly occurs with nasal structural issues or persistent allergies.

Sinuses infections can prove challenging to pinpoint since they are the common cold or allergies in most cases. On the one hand, the common cold generally starts, builds, then slowly disappears, only lasting a couple of days to a week. However, it can transform into a sinus infection in the middle. On the other hand, a nasal allergy is characterized by inflammation due to pollen or dust irritation of the nose. It may be accompanied by an itchy nose, congestion, sneezing, and running nose, similar to a sinuses infection. However, some of the common presentations of sinusitis, depending on the type, include:

Some of the signs and symptoms of acute sinusitis include: · Thick greenish or yellow running nose or down the postnasal drainage · Congested nose causing difficulty in breathing · swelling, pain, pressure, and tenderness around the cheeks, eyes, forehead, or nose that worsens when bending · Ear and facial pressure · Headache, cough, fatigue, and fever · Aching in your teeth · Altered sense of smell · Bad breath

Some of its main signs and symptoms include: · swelling, pain, and tenderness around the cheeks, eyes, forehead, or nose · Congested nose causing difficulty in breathing · Thick, discolored running nose · Nasal inflammation · Reduced sense of taste and smell · Sore throat and cough or throat clearing · Bad breath · Headache and fatigue · Aching in the upper jaw and teeth · Ear pain

When to Seek Treatment

The sinus infection's unpredictable nature makes it difficult to pinpoint if you have sinuses. Therefore, most people use at-home treatment to help ease the symptoms. However, doctors generally advise not to use over-the-counter medication for more than three days. You must visit the doctor if your sinus infection symptoms last more than five days or keep recurring over a short time. Contact your doctor immediately in case of high fever, facial swelling, stiff neck, severe Headache, confusion, or problems with your vision.

For the diagnosis of sinus infection, the doctor will ask about your signs and symptoms to get a detailed medical history. They may also perform a physical examination by checking your throat, nose, and ears for inflammation. The doctor might opt for imaging tests for chronic sinusitis to check your sinuses and nasal passages. Other tests that the doctor might perform include nasal endoscopy, allergy tests, and blood tests.

If you are diagnosed with a sinus infection, your doctor will assign you medication depending on the severity of the sinusitis. For uncomplicated sinusitis, you will get treated with decongestants. In other cases, your doctor might prescribe antibiotics and pain medications or steroids along with antibiotics. The doctor may opt for surgery to correct any structural problems in rare and severe cases. After a diagnosis, it is best to complete the dosage for efficient treatment.